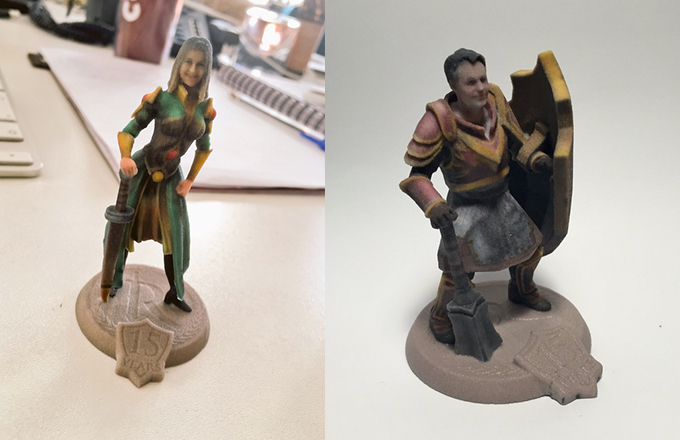 The agency (which specialises in creating personalised events for a range of brands, including Paramount Pictures, RealD and Warner Bros, created the concept in order to provide its gaming clients with unique and relevant content for audiences. Having discovered that the technology was not being used in this way, the company teamed up with scanning company, 3D Print City, to create it.

The concept was launched at an event to celebrate the 15th anniversary of one of the biggest online games in the world: Runescape. Guests (including media and consumers) in attendance were invited to be scanned and transformed into famous characters from the game, which were then 3D printed and delivered to them for free following the event. The scan was of their entire bodies, and only took a matter of seconds on the day.

The concept proved to be a success, as Tanja Ahles, Events Manager at parent company Jagex testified:

“We’re very pleased to have integrated a 3D body scanning booth into the RuneScape 15th Anniversary press and community event. It had a great response from attendees; everybody wanted their moment in the scanning chamber, which was visually very impressive! Even after the event itself, we gained a lot of social media attention when journalists and VIPs received their figurines through the post. Their print quality was quite remarkable, making them excellent – and unique – mementos of our event.”

Chris Whittle, Founder of Experience12, sees this as the future for events: “This technology presents exciting possibilities for relevant brands and experiential. Personalisation is one of the best ways to engage audiences, however it has always been too time consuming and investment heavy for larger scale activations. Technology like this flips that on its head, providing a cost-effective takeaway for audiences, which is both personal yet brandable.”

Nigel Stanton, Director of 3D Print City, remarked: “This is the first time we have ever done something like this with 3D printing, but now the technology exists demand will inevitably grow. Being able to transform participants into their favourite characters will allow us to create everything from personalised board game pieces to unique action figures for children, which for the right brands is an invaluable way to engage and excite their audiences”