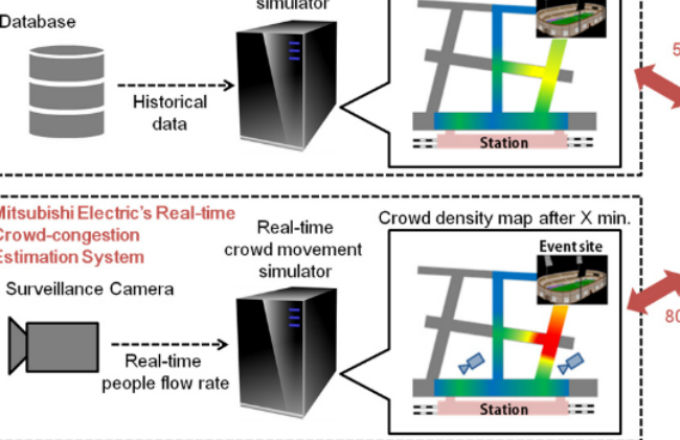 Mitsubishi Electric has announced that it has jointly developed what is believed to be the world’s first system that analyses data from surveillance cameras for high-accuracy real-time estimation and prediction of crowd congestion on pathways to and from event sites.

It has worked in collaboration with the Research Center for Advanced Science and Technology of Tokyo University (RCAST). As a solution for effectively managing crowd congestion based on highly accurate prediction, it is hoped that the technology will contribute to increased visitor safety and security at events.

The system is said to be the world’s first simulator of real-time crowd movements. Its 80 percent accuracy rate is approximately 30 percent higher than that of conventional methods. Using data from surveillance cameras to estimate and predict crowd movements in real time, the system is a practical solution for relieving crowd congestion on pathways to and from event sites. Also, it greatly reduces computational complexity compared to conventional methods thanks to RCAST’s high-speed human-behavior model for simulating crowd movements by focusing not on the complete crowd but nearby people.

Mitsubishi Electric’s new system will provide event organisers with a practical means for reducing crowd congestion to maintain event pathways. Since areas in risk of excessive congestion can be estimated in real time, crowd-management countermeasures can be carried out in advance. The results are increased visitor safety, more secure event management and more efficient crowd-management operations.