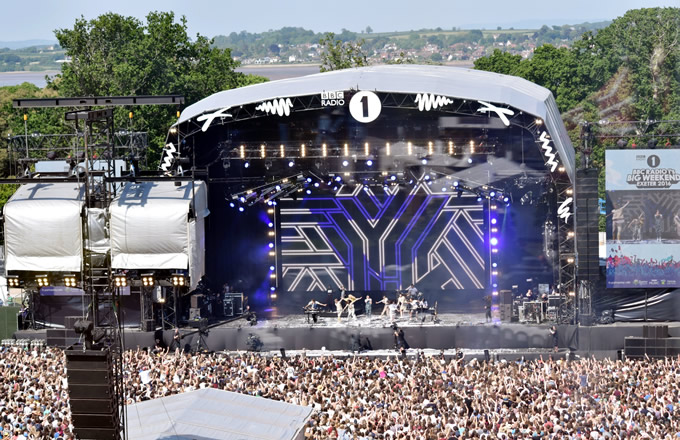 Powderham is ‘Paradise’ for Radio 1's Big Weekend
Share This

CHRIS MARTIN led the chorus of acclaim for the ‘team’ which helped to make BBC Radio 1’s Big Weekend such a spectacular success . . . and Showsec played a role in ensuring the experience was every bit as good as the glorious Bank Holiday weather for music lovers.

The crowd management and event security specialists were part of that team which delivered a memorable two-day event for over 50,000 people in attendance and reached a particularly special finale as Coldplay’s Martin enjoyed a triumphant homecoming to his native Devon.

The band’s lead vocalist sang the praises of all the staff and volunteers who contributed to the staging of Radio 1’s Big Weekend in the “most beautiful place on earth”, a viewpoint echoed by many others, most notably the BBC production team and Devon and Cornwall Police.

Superintendent Glen Mayhew declared the event an “overwhelming success” with only a few minor incidents reported over the course of the two days at Powderham Castle.

The music extravaganza was a continuation of Showsec’s long association with the BBC and the largest free festival in the United Kingdom, a significant factor which was recognised by Laura Armstrong, the BBC’s Event Production Manager for Radio 1’s Big Weekend.

“The two companies work well together, which is important to the success of an event where we often go for locations which are a bit out of the ordinary,” said Armstrong.

“It’s good to be able to draw on a strong management team we trust. We can gain from the advice given by Showsec and they listen to our feedback on certain matters.

“We aim to be a gateway to music festivals with this event, so in terms of locations, we’re driven by places which aren’t well-served by live music events of this type.”

She added: “Each site therefore presents different challenges and while the audience is dictated by the line-up, it does nevertheless change from one location to another.

“The biggest challenge was managing the movement of people in and out of this site, especially when so many were leaving all at once at the end of each night.

“With the support of Showsec and the involvement of other agencies, we worked very hard on putting a strong traffic management plan in place. It was good therefore to see it come together so well and we have had some very positive feedback.”

As well as the continuation of a long-term relationship with the BBC, the event presented Showsec with an opportunity to work with two new clients, Exeter City Council and the Earl of Devon, whose Powderham Castle estate was the setting for Radio 1’s Big Weekend.

“We feel we are a part of the Radio 1 family, having worked with the BBC on this event for many years now, so we have formed a strong relationship in that time,” commented Regional Manager Richard Church, who was Head of Security for the event.

“While we are proud to be associated with the BBC brand for this flagship event and fully understand the specific requirements of Big Weekend, the fact that it is taken to different locations around the country is also good profiling for the Company.

“In this instance, we have been introduced to working with Exeter City Council and the Earl of Devon which may well lead to other opportunities in the future.”

Showsec deployed 550 staff at Radio 1’s Big Weekend who were assigned to operational requirements for the BBC, the local authority and the Earl of Devon.

That workforce was given strong leadership by the Company’s management team in which Church was supported by Director Simon Battersby (Security Director), Operations Executive Jennifer Edwards (Project Manager) and Area Managers Joe Milner and Tom Bailey.

“The management of the ingress and egress presented the biggest challenge, so a crucial element of the crowd management plan was supporting an effective shuttle bus service which moved 12,000 people in and out of the site on each day,” explained Church.

“The buses were picking people up from five locations in surrounding areas and bringing them to a terminal which was created within a short walking distance to the north of the site. This limited the number of vehicles which actually accessed the site.

“An important part of the whole Radio 1 Big Weekend experience is the welfare of the audience when arriving and leaving the site. In the circumstances, that operation went as well as could be expected and contributed to the success of the event.”