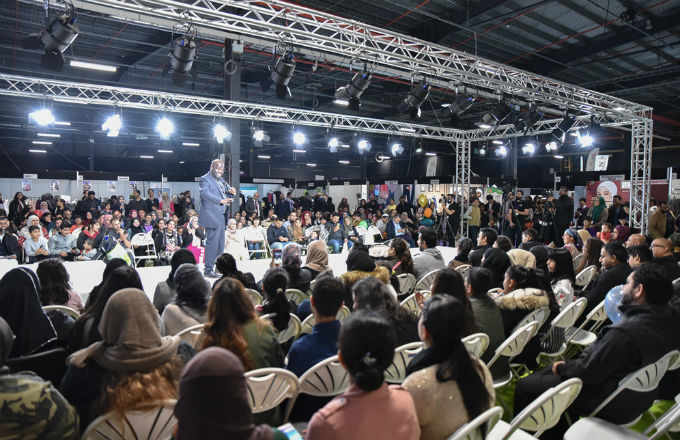 A record-breaking number of visitors have taken part in the world’s biggest-ever showcase of the trillion dollar Muslim consumer market.

Over 13,000 people from across the UK attended the third annual Muslim Lifestyle Expo 2017 (MLE2017) which took place at EventCity in Manchester. The show featured 150 international and UK exhibitors across 6,000 square metres of space.

Exhibitors attended from around the world including those from Canada, Qatar, Malaysia, Singapore, Iran, Turkey, and the UAE highlighted the growing business opportunities in the Muslim consumer sector.

The Muslim lifestyle sector has seen growth at nearly double the rate of the global economy with expenditure of consumers on food and lifestyle sectors growing by 9.5% to $1.9 trillion in 2015 and projected to reach $3 trillion by 2021.

Organisers of the MLE2017, with Asda as headline sponsor, say this year’s event strengthened its position as the world’s leading Muslim lifestyle event.

Tahir Mirza, founder and CEO of MLE2017, said: “We are pleased that once again the MLE team has delivered a professional, high quality and international standard event.

“Our vision has always been to create a commercial platform that benefits the growing Muslim lifestyle sectors and captures the talent and innovative capabilities of the British Muslim population.

“MLE connects the public with mainstream non-Muslim economies and serves to highlight the immense contribution the Muslim community makes to the global economy.

“Given the high standards we set each year, and the very positive feedback from visitors and participating businesses alike, this now is a firm fixture in the calendar.

“We are particularly pleased to see the high number of Muslim businesswomen in start-up companies, as well as accounting for nearly 60% of the visitor demographic.

“We would like to extend our thanks to all those who attended from across the UK and abroad and those who exhibited and partnered with us in playing a key part in making this year’s event so successful.

“It has given us the inspiration and energy to make our 2018 event even bigger and better and to strengthen our position as the world’s biggest Muslim lifestyle event.”

MLE has been created to provide a unique marketing platform for global brands and businesses to engage with the Muslim consumer.

Earlier this year, Muslim Lifestyle Expo was shortlisted as finalists in The British Muslim Awards 2017 in the category of Arts & Culture Awareness.

This follows the previous award as Winner of the Services in Creativity and Technology award at The British Muslim Awards 2016.  These endorse the leadership position MLE has achieved in the Muslim Lifestyle sector.