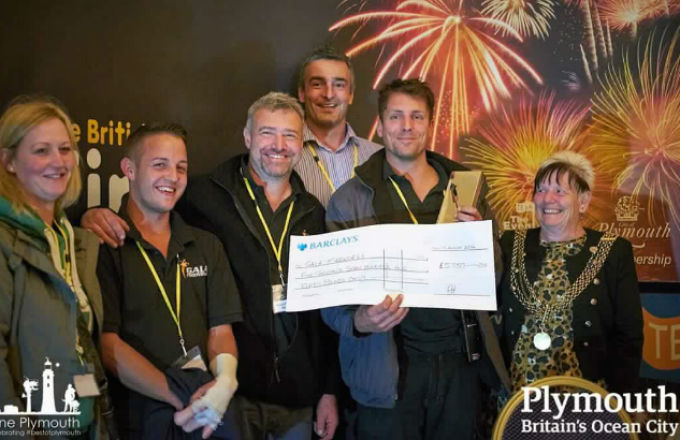 The British Firework Championships, held in Plymouth over two nights and organised by The Event Services Association, has again been a great success.The fabulous weather brought a bumper crowd to the first night's displays with clear blue skies all day for the crews to set up. Despite a deluge on day two, the crowds were rewarded with a clear and still evening to view what proved to be the winning display. Midlands based Gala Fireworks, who fired last of all, were crowned the 2016 Champions by a panel of six judges.

Gala's Danny Edwards said: "It feels amazing, we've put so much hard work into it; it means so much to win. I'm really jubilant right now, I can't quite believe it.

"I've been coming here for ten years as a spectator. I've always loved fireworks. I started Gala Fireworks five years ago and all the time I've been coming here I've said to myself  'one day I want to be on the breakwater, firing a show', so even just to be here is amazing but to take first place - it's not quite sunk in yet."

In all, the British Firework Championships brings an estimated 200,000 people into the city for the two day extravaganza, a major boost top the local economy. Hotels, guest houses and campsites report huge occupancy rates during the period and restaurants and bars combine to provide an amazing experience for visitors.

Being a curved and high seafront, Plymouth is a natural amphitheatre for spectators and the Mountbatten sea wall a few hundred yards off-shore provides a brilliant, safe firing site. That's what's made the event such a great success for over 20 years now.

Runners up Aurora Fireworks (Night 2, Display 1) hail from West Sussex and third place went to F1 Pyrotechnics (Night 1, Display 3) from Surrey. In all six teams competed, the overall scores were:

For a full breakdown of the judges scores, click here: http://www.britishfireworks.co.uk/index.php/the-british-firework-championships/judges-scores

The event takes place annually in August and the 2017 event will be held on Wednesday 9 & Thursday 10 August. Join us on Twitter @BritishFirework where you can find links to some amazing footage of all the 2016 displays.