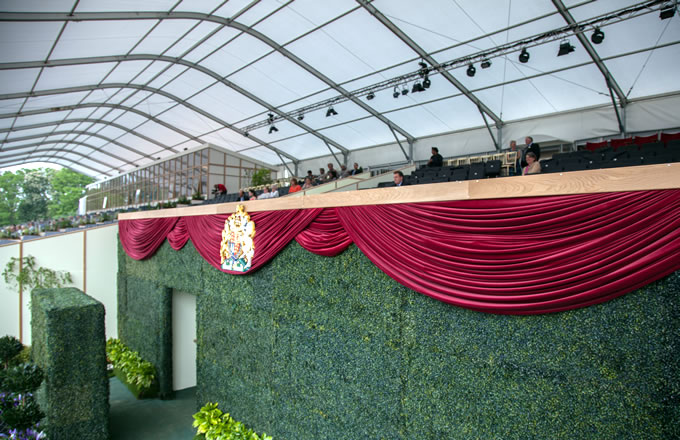 H Power called upon Blackout’s expertise to dress the Royal Box and Castle Arena stage, ahead of the momentous Royal Windsor Horse Show in celebration of Her Majesty The Queen’s 90th birthday, May 2016.

Chris Brain, Blackout project director and his 3-strong team were entrusted to supply and hang the 18 metres of red velour swags adorning the Royal Box, onto which a large Royal crest was installed.

Blackout provided black drape masking on the Castle Arena’s main stage, acting as a backdrop for the large screen and set elements. The Orbit stage, situated to the right of the main stage, was shielded with a white mesh banner displaying the Royal Windsor Horse Show logo during the daytime events for Royal Windsor Horse Show and then was taken down as the glittering performances from the likes of Kylie Minogue and Dame Shirley Bassey were ready to begin. Black wool serge drapes provided the backdrop to the curved stage, ensuring the whole focus was on the stage performances. Curved truss was utilised to hang the black drapes at the back of the stage, and a number of motors for the banner reveal. 105 red white and blue ribbons of 8m were also supplied for the show’s finale, fanning out from the giant birthday cake in the centre of the Castle Arena.

Chris Brain explains: “Having worked with H Power and Royal Windsor Horse Show before it was a privilege to be involved with a live event marking such a pivotal moment in our monarch’s history. Ahead of our 3 day install, we worked closely with the production team to ensure that the Royal Box, main stage and screens were all dressed to a level mirroring the scale of such an occasion. With this year’s show bringing an extra level of attention to detail, we are proud to be included as a trusted supplier.”

Nick Brooks-Ward, H Power’s project director added, “With the world’s attention on the Royal Windsor Horse Show and The Queen’s 90th Birthday Celebration, it was pivotal for us to engage the most trusted live events suppliers to put on a show to remember. Chris Brain and his team at Blackout offered an exemplary service, working to tight schedules and challenging weather conditions – they were a valuable asset to the overall production of The Queen’s 90th birthday celebrations.”

Across the five day equestrian spectacle, Royal Windsor Show played host to over 3,000 horses and ponies taking part in over 250 jumping, showing and carriage driving classes. The Castle Arena played host to The Queen’s 90th Birthday Celebration in the evenings, a show celebrating her historic reign through the years, with over 900 horses and 1,500 participants storytelling her life. The show culminated in Her Majesty’s attendance on Sunday evening, with performances from Take That, Katherine Jenkins and Beverley Knight, all hosted by Ant and Dec.