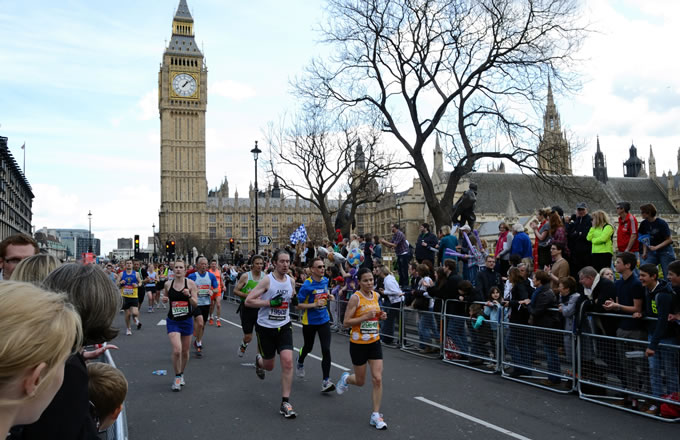 Along the 26.2 mile route through the UK’s capital city, Arena Group installed all the mile and kilometre marker towers, beginning at Blackheath Common’s start line right through to the last marker before the finish line on The Mall, in front of Buckingham Palace.

Each tower measured 1.077m wide by 2.115m deep, stood 6m high and was cladded with Virgin Money branded Mile Marker boards. The towers that stood on opposite sides of the road were adorned with red and white helium-filled balloon arches.

Arena Group installed a total of 2,031 temporary seats across the course, with 579 seats within two covered grandstands lining either side of the Start Line.

A further 1,452 seats in 12 grandstands lining The Mall offered optimum views of runners completing the gruelling challenge. Arena Group also constructed a temporary stage at Tower Hill which provided a platform for bands to entertain runners and spectators.

Arena Seating’s project director Martin Clark comments: “The Virgin Money London Marathon is one of the most logistically challenging builds Arena Group delivers due to the marathon route running through the heart of the city. Spanning four days, two separate crews work seamlessly to install the structures, mindful of causing minimal disruptions to traffic often by working through the night.

“This year saw an additional challenge as the position of a number of towers had to be altered due to the recently constructed Cycle Superhighways.

“As soon as the last runner passed Mile 1, the course crew split into 6 teams to commence removing the branded towers.  The balloon arches were carefully taken down and given to the local children.  My role at this point is to maintain a safe distance between the back runners and the Arena crews.  It is testament to the hard work of these crews that we could ensure all roads were ready to re-open at 6pm on race day.”