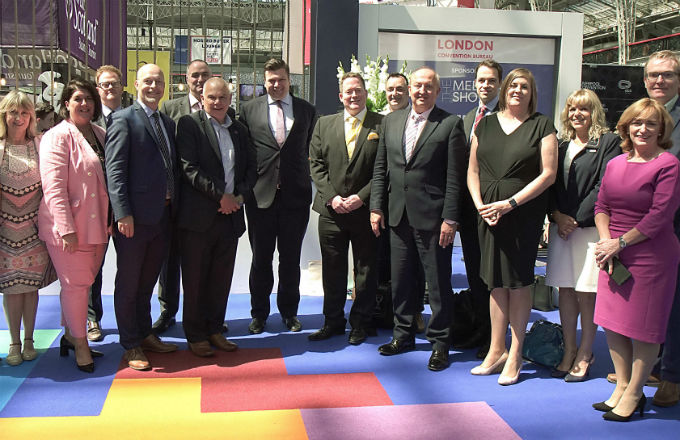 Leading members of the UK's meetings and events industry joined James Heappey MP in a closed roundtable discussion at The Meetings Show earlier today (Wednesday 27 June), to discuss how best the UK can best win business now and in the future.

After Wells MP Heappey, who is chair of the All-Party Parliamentary Group (APPG) for the UK Events Industry, officially opened the show, the lively discussion titled A winning welcome: securing business for Britain brought him face-to-face with industry stalwarts.

Discussion chair Paul Kennedy challenged attendees to tackle pertinent issues, such as identifying Britain's strength as a destination, whether Brexit is having an impact on trade, how to influence European bodies to hold meetings here in the UK and asking what buyers really want.

Those taking part in the discussion with Heappey and Kennedy were:

Participants said Britain's strong points as a destination are its accessibility and variety. They also said it is an identifiable brand, a centre of excellence for creative industries and is, above all, well-connected.

There was debate over whether Brexit had impacted trade negatively or positively, with Barbara Jamison of London & Partners stating it had led to uncertainty among some event buyers while Kerrin MacPhie of VisitBritain claimed she had seen little impact.

James Heappey MP said: “There will undoubtedly be some major European associations who receive their funding from the EU, who may currently be nervous or hesitant about spending that EU money hosting their events in the UK.

“But this will be a short-term reaction to the political environment, Britain's strengths and appeal will counter balance these hesitancies and once we've left the EU, we will be as accessible and attractive as we've always been.”

The difficulties facing some nations in gaining visas to come to the UK was a bigger issue, said attendees, who called for a simpler process to avoid buyers opting for more accessible markets, such as Dubai.

Heappey said the visa issue needs to be considered, but it was a balancing act between issuing visas to individuals on a 'quick business trip' and those who were wanting to stay longer.

On the topic of promoting the UK's meetings industry abroad, Heledd Williams of Visit Wales said while the UK was recognisable, buyers from abroad were often confused over the terminology used.

“They ask, are we Great Britain, Britain, or the UK? It's confusing,” she said.

The issue of disjointed funding for marketing different cities and regions was also discussed with participants agreeing that alternative funding sources, such as the bedroom tax, should be considered to enable a consistent promotional funding stream.
Participants also expressed ongoing concerns of skills shortages in the sector and questioned how more local staff could be employed in hotels and meetings venues around the country.

Barbara Jamison of London & Partners suggested that hotel staff should receive destination training to enable them to better promote the region they work in and promote 'brand Britain' better.

The roundtable marks the beginning of a long-term relationship between the APPG and The Meetings Show to ensure the industry continues to drive business at home and internationally in the future.