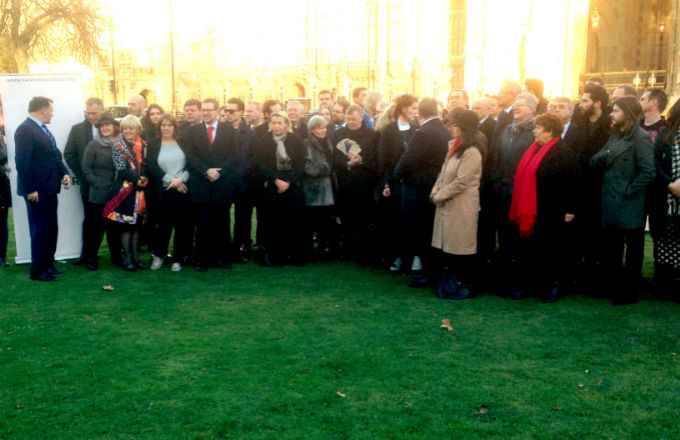 A cross-party group of MPs joined forces with campaigners from the music industry outside Parliament on Monday (29/11) as the Digital Economy Bill reached its ‘report stage’ in Parliament.

The aim was to convince the government to accept the “Ban the Bots” amendment and combat industrial scale secondary ticket touting to protect genuine music fans.

MPs and Peers are backing an amendment drafted by All-Party Parliamentary Group On Music which aims to ban the use of bots to buy tickets - internet software used to harvest tickets before genuine fans have a chance to buy them.

Led by MPs Nigel Adams and Sharon Hodgson, the photo call was held on College Green, Westminster, and included a number of well-known faces including Josh Franceschi from You Me At Six!, Sonia Friedman, producer of West End hit Harry Potter And The Cursed Child, ATC manager Brian Message and Featured Artists Coalition CEO Imogen Heap, as well as industry bodies including The Event Services Association (TESA).

The move follows years of campaigning by Sharon Hodgson on this issue, Nigel Adams tabling an amendment to the Digital Economy Bill, and the Culture, Media and Sport Select Committee's decision - following a hearing on the subject on 15 November - to recommend on a cross-party basis that this amendment be taken forward.

“The Government have said they will look into this further,” said Sharon Hodgson, “and we want to show the Government how great the interest and support is to act and ensure fans are put first, not only by banning the use of bots but also implementing recommendations in the Waterson Review into the secondary ticketing market,”