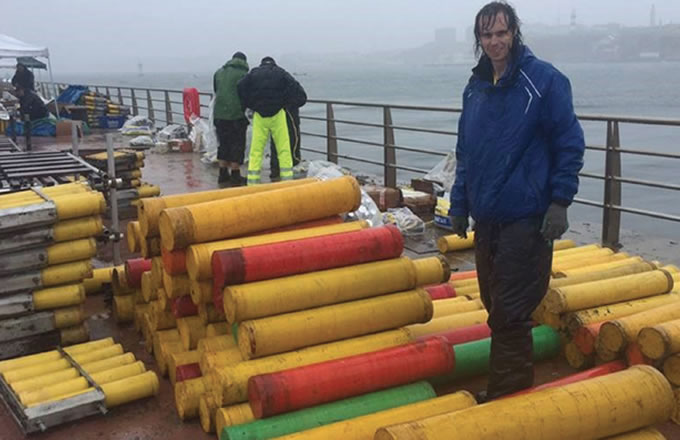 Fantastic Fireworks won the exciting British Firework Championships in Plymouth, organised by TESA (The Event Services Association). They beat five other leading British teams with an amazing display watched by a huge audience, who lined the city's cliffs and promenades.

This is the second title win for Fantastic Fireworks, which is celebrating its 30th anniversary this year, having first won at the inaugural competition back in 1997. Managing Director Jon Culverhouse said: 'It's a fantastic present for our 30th birthday year. Our team worked in atrocious conditions to get the display up. Wind and driving rain all day soaked everyone to the skin but we managed to keep the fireworks dry. It's a credit to the professionalism of our team that everything went off as planned. And of course we are all thrilled with the result.' The title win is another feather in the cap of the company who last year were invited to the Cannes Film Festival to launch the latest Expendables movie. And they have a 3rd chance of glory this month when they compete in the British Musical Fireworks Championship in Southport, this time with fireworks choreographed to a music soundtrack. In November the company will be delivering some of the nation's biggest and most spectacular displays, including a unique fireworks production of Jeff Wayne's Musical Version of The War of the Worlds at Drayton Manor Park and Windsor Racecourse.

Bright sunshine lit up the rugged, fortified, handsome Ocean City of Plymouth. The scene was set for a pyrotechnic battle royal as once again the natural amphitheatre of Plymouth Sound was the setting for the epic spectacle that is the British Firework Championships. For some 200,000 people, this two night event is a dazzling, booming, centrepiece to their summer holidays. For the City's tourism industry it's a week of 100% occupancy that draws repeat custom year on year. Held in the City for the 20th consecutive summer, the Championships provide a fabulous lure that the whole city can build upon. Supported by Plymouth City Council, the event draws in some £30 million pounds to the city. Businesses plan their corporate entertainment around it, residents staycation because of it and visitors have long since developed a very positive association with the place, coming on from coastal and countryside resorts across Devon and Cornwall.

Thanks to investment from the City Council and with the help of the British pyrotechnics industry the event has helped to add to the city’s attractions during the summer. There's now a calendar of events to appeal to vast audiences, including Flavour Fest and Armed Forces day among many others. Great events draw the eyes of the world and the 2015 British Firework Championships were no different. No fewer than four TV channels covered the event: BBC and ITV, (as you'd expect) sent their news crews, but this year two crews not normally present made the trip. Russia's answer to This Morning sent their most glamorous UK reporter to film a segment for Vladimir Putin's favourite breakfast TV show. Oligarchs, we're told, love to put on a firework display so the exposure will do the teams no harm! Britain's favourite ex-cricketer & Jack the Lad, Andrew Flintoff was also there for a new series of his culinary discovery show, Lord of the Fries.

He and co-presenter Rob Penn rocked in on a big-pimping chopper trike on the second day. Alas the torrential rain and howling winds did them no favours as they, and also the competing teams, battled all day against the elements. They were travelling along the South Coast and after a couple of months of preparation, factored in a visit to the Championships for an episode due to air in the Spring. Both presenters were soaked, freezing and dejected by 7pm but then, right on cue, the clouds stopped leaking, the wind stopped lifting the spray off the waves onto the firing site and it seemed all was well with the world. Except the damage was done. Gala Fireworks, firing second on the final night had suffered a dose of liquid gremlins and their firing sequencing was knocked off kilter. This made for an imbalanced show with some over-filled clusters and other sections bare. Such a pity as Danny Edwards had such a great display in store. The winners were Fantastic Fireworks, who received the impressive perpetual trophy which was presented by the Lord Mayor, and here's what the winning team had to say: "Massive thanks to all our wonderful supporters who cheered us to victory tonight. Yes folks we won! Thrilled we didn't disappoint you and even more thrilled to be holding aloft the trophy.

Hope you enjoyed the shows and that we'll see you next time around." in second place were Spyrotechnics and 1st Galaxy Fireworks came third.Also competing were Pheonix Fireworks and Essex Pyrotechnics. Event Organiser, Kevin Minton, said: “Over the two nights, the spectators were treated to six superb firework displays. The weather for setting-up on the first day was brilliant but the second day was a bit testing to say the least. Because of water damage we had a slight delay to the start on Wednesday but a lot of the problems were overcome and most people were probably unaware of any drama and, from an event organiser’s perspective, that’s how it should be”. Put the dates for next year in your diary for 16th & 17th August 2016.