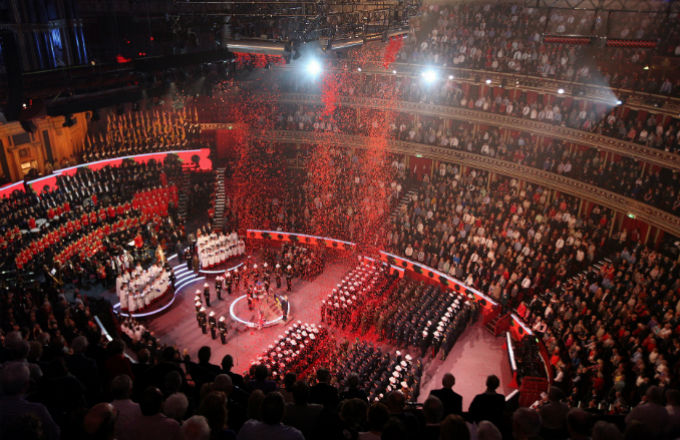 Eat to the Beat provided specialist behind the scenes catering and support services as The Queen and senior members of the Royal Family attended the Festival of Remembrance at the Royal Albert Hall.

Eat to the Beat, a division of Global Infusion Group (GIG), has serviced the Festival of Remembrance since 2008. This year for the first time Eat to the Beat created a pop up kitchen and dining area in the loading bay of the Royal Albert Hall to feed 1,100 participants who took part in the festival. They dined on a menu of traditional comfort food including Shepherd’s Pie, Vegetarian Shepherd’s Pie, Thai Chicken Curry and Rice.

Eat to the Beat also catered the 260 strong BBC team and event crew from the venue’s kitchen and also supplied special hampers to everyone involved in the event.

Among the stars taking part in the festival, televised on BBC1, were Michael Ball and Alfie Boe who sang ‘You’ll Never Walk Alone’, Birdy who sang ‘Wings’ and Laura Mvula who performed a moving rendition of ‘Abide With Me.’ Alexander Armstrong, host of the BBC quiz show Pointless, performed ‘Comin’ In On A Wing And A Prayer’ accompanied by the Royal Air Force Squadronaires dance band.

This year’s festival remembered the Battle of the Somme, Battle of Jutland and the 25th anniversary of the Gulf War as well as the 80th anniversary of the maiden flight of the Supermarine Spitfire. The audience were given LED wristbands to wear with each one representing 100 of the approximately 400,000 British killed, missing or wounded during the Battle of Somme. As the evening drew to a close thousands of poppies cascaded down to the ground during a two minute silence before the National Anthem.

The Queen was accompanied by the Duke of Edinburgh along with the Prince of Wales and Duchess of Cornwall and the Duke and Duchess of Cambridge. Prime Minister Theresa May and Leader of the Opposition Jeremy Corbyn also attended the ceremony.

Eat to the Beat were appointed by Riverside Productions which co-ordinated the event on behalf of the Royal British Legion. Riverside’s Production Manager Keith Morris praised Eat to the Beat for managing to feed 1,100 people in just four hours. He said: “I was very impressed with organisation of the space and the quality of the food you were able to serve. The Legion have had so many compliments about the food from the troops that they too are very impressed.”

Louisa Corbett, National Events Manager for Royal British Legion, thanked Eat to the Beat for their contribution to the Festival of Remembrance. She said: “Your professionalism and flexibility helped us greatly especially when extra numbers turned up wanting to be fed! I have received incredibly positive reviews about the quality of the food, and the hampers went down a treat. I very much look forward to working with you in the future.”

Mary Shelley Smith, Global Operations Director of Eat to the Beat, said: “We are honoured once again to have been selected to cater the Festival of Remembrance. It was a wonderfully moving occasion with many poignant moments. It was quite a challenge to feed so many people in such a short space of time but our team are very experienced to deal with this sort of occasion, and the kitchen and dining facility we created at the Royal Albert Hall worked really well.”

Eat to the Beat had a crew of 26 on site on the Saturday including six chefs and front and back of house staff. Team members were also on site for two days in the build up to the festival to feed the BBC crews. GLD supplied tables and chairs for the pop-up dining room while Vital Spark provided the power and lighting.