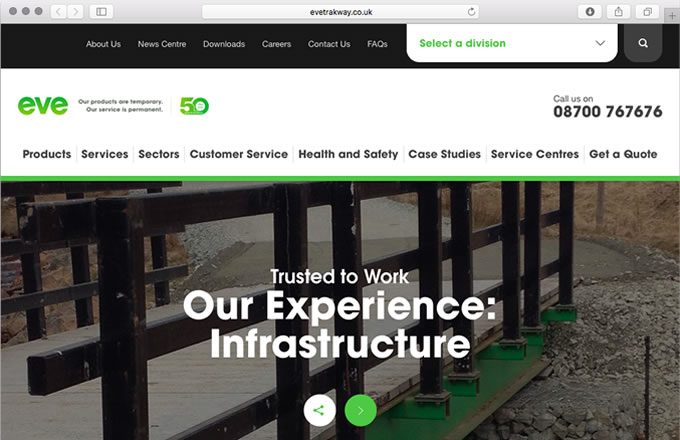 Eve, the UK’s leading supplier of temporary access systems, has announced plans to celebrate its 50 year anniversary throughout 2016.

Eve was founded in 1966, the year of England’s triumph in the Football World Cup, and to mark the 50 year milestone, the company has kicked off the celebrations by launching a brand new website at www.evetrakway.co.uk. With a fresh responsive design, the site is fully optimised for use across a range of devices, including desktops, tablets and smartphones.

Nigel Quinn, Eve’s Managing Director said: “2016 is a very special year for us and we wanted to make an effort to mark the occasion for our staff, customers, partners and other stakeholders. We’ve just launched our new website and we’ll be carrying out a string of fundraising activities throughout the year to raise money for MacMillan Cancer Support, Barnardo’s and British Heart Foundation, which have been nominated by Eve’s staff.”

“We’ve built the new website to better promote the range of solutions and expertise we offer our customers in the Events, Energy and Infrastructure sectors, whilst at the same time showcasing the scale of projects we work on,” he continued.