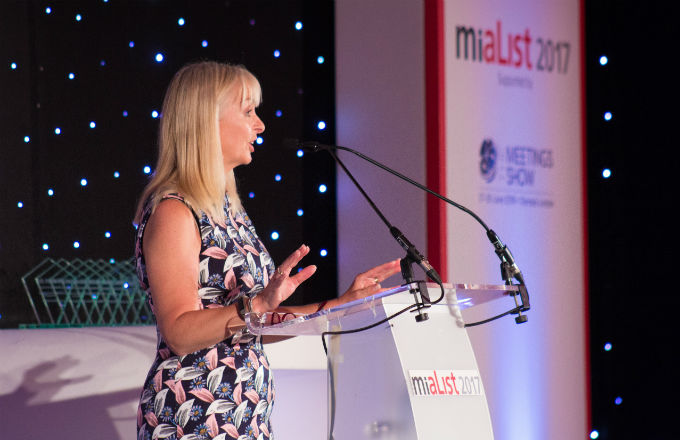 The Meetings Industry Association (mia) has revealed the winners of its prestigious 2017 miaList awards.

The mia received a huge number of nominations for the awards, which are sponsored by The Meetings Show and since 2011 have been celebrating those outstanding and passionate individuals from the meetings, hospitality and events industry who go above and beyond the call of duty.

Alastair Stewart, managing director of etc. venues, was awarded the Leadership title. Under his direction the specialist city centre venue company has quadrupled in size and last year hosted over 15,000 events across 15 venues in London and Birmingham.  After opening one of London’s largest new venues at County Hall, a new venue in Manchester has just been announced.  Alastair was an Ernst and Young Entrepreneur of the Year finalist in 2009 and 2013 and etc.venues was named in 2017 by the London Stock Exchange as one of the 1000 Companies to Inspire Britain.

Rising Star was presented to Tom McMillan, deputy meetings and events operations manager at Park Plaza Victoria. Recognising a 'highly talented young man', the panel was impressed by his composure, delivery of the right answers and his ability to go above and beyond in his job by working with charities who introduce disadvantaged teenagers to the industry.

The Conference and Events title was presented to Petar Sotirov, events C&B outlets operations manager at Luton Hoo Hotel and Spa. Judges said 'forward-thinking' Petar encompassed everything they were looking for in an award-winner and praised his passion for the industry and focus on extending his team's abilities alongside his own.

Judges also awarded a Highly commended for Conference and Events to Charlotte Best event manager at the QEII Centre in London.

Winner of the Sales category was Emma Hayes, head of event sales at Whittlebury Hall. Emma has clear targets which she hits and regularly upsells and was responsible for providing the company's best Christmas since 2008. Her robust CPD and five-year plan particularly impressed the panel.

Back of House was secured by Paul Tattersdill, head gardener at Tylney Hall and Gardens who judges dubbed 'loyal, conscientious, interesting and modest'. Paul, who works with the Royal Horticultural Society to bring new plants to the company was found to clearly love his products and team.

The award for Food and Beverage Production was presented to Mark Potts, head chef at The Mount Somerset Hotel and Spa. Mark's focus on recruitment and passion for developing his staff, which has lowered staff turnover, impressed judges. The chef also provides work experience in his kitchen for autistic adults and has created a vegetable garden in the hotel's grounds to further improve the business's sustainability.

The coveted Marketing award was won by Richard Kadri-Langford, head of marketing at Lime Venue Portfolio. Richard’s passion for the industry instantly came across in his interview with the judges, when he was able to demonstrate specific and exceptional results in many of the projects that he has delivered.

This year the miaList has three team award categories – Agency Team, Supplier Team and Venue Team. From a shortlist of five teams for the Agency Team award, Inntel Ltd was voted the winner by peers in an online poll. Marketing agency Patch Media was named Supplier Team while the hospitality team at Towcester Racecourse was voted winner of the Venue Team award.

Kay England, vice chair of the mia who made the welcoming address, said: “The miaList is about recognising the incredible and inspiring talent within our industry and we were delighted with the huge number of entrants. The 2017 winners certainly showcase some of the sectors’ exceptional individuals who have stood out over the last 12 months for their dedication, innovation, leadership and commitment to the events industry.”

Jane Longhurst, chief executive of the mia, said: “The miaList was initially conceived in 2011 as part of our 21st anniversary celebrations – I am delighted that six years on, it has proved so successful that it has become a deep-rooted part of our work to drive industry standards and showcase and recognise talent within the sector. Congratulations to all of this year’s deserving winners, and thank you to all of our partners, judges and supporters for their contributions to the miaList’s success.”