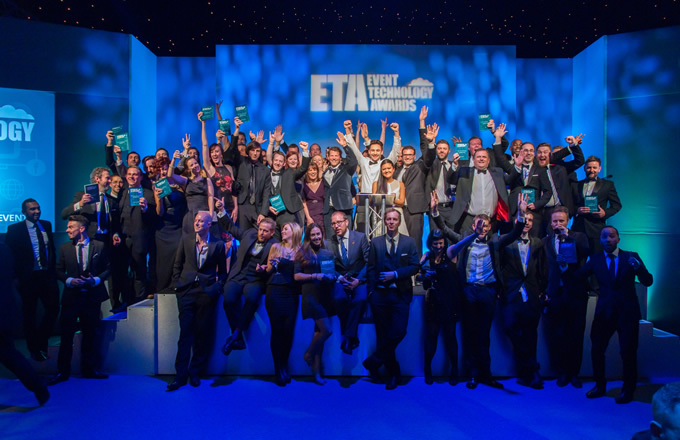 If proof was required that the use of event technology continues to grow in stature and popularity, a quick look at the shortlist for this year’s Event Technology Awards (ETAs) should satisfy even the biggest sceptic. Organiser, AMP Events, has announced the shortlist for 2016 and an impressive 196 entries have successfully made the cut. This has been whittled down from over 330 entries following submissions for this year’s awards.

TThe final stage in the judging process now begins in earnest and the winners will be revealed at an award ceremony held at the pop-up venue Supernova, Embankment Gardens, London on the evening of the 9th November. Sister event, Event Tech Live takes place the same day at the Old Truman Brewery.

This year’s shortlist features all sectors of the event industry and includes the use of technology at many of the world’s largest conferences, meetings, exhibitions and festivals alongside a number of high profile brand activations. Many new companies submitted entries this time round and the list includes high profile technology companies, agencies and organisers alongside start-ups, new products and the industry’s brightest stars. The shortlist for the ‘People’s Choice’ category, voted for by the industry will be revealed in the next few weeks.

Adam Parry, co-founder and commercial director of the ETAs comments: “One look at the shortlist for this year’s Event Technology Awards 2016 proves that the use of event technology is growing exponentially. We were literally overwhelmed by the number of entries that we received and shortlisting was a lengthy process. Anyone who has been successful and made the cut should be really pleased with themselves, the competition was tough.”

We’re really looking forward to the event itself now, it is always a great evening offering plenty of opportunities for networking and we expect to attract at least 500 attendees this time round,” added Parry.