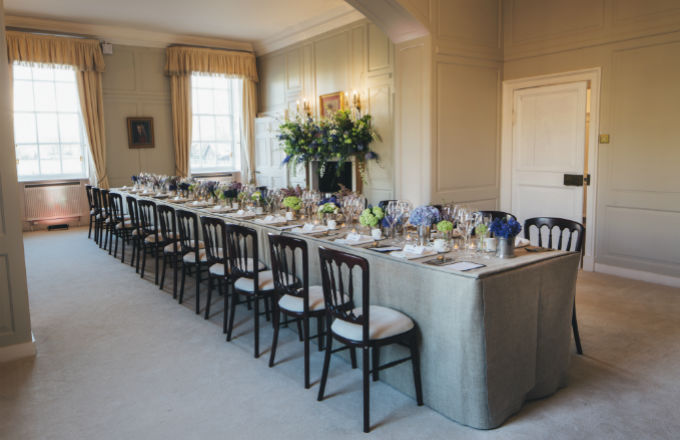 Royal Hospital Chelsea has announced Wren House will be available for corporate hire from August  following the completion of extensive restoration work.

Named after the  legendary architect, Sir Christopher Wren, the venue which was once private apartments  has undergone widespread renovation work throughout 2015 and early 2016.

There has been considerable investment in the Wren House project in order to restore its existing, Grade I-listed architectural features and to make the new spaces available to corporate event bookers. Importance was placed on striking a balance between maintaining the historic features of the venue whilst creating a fresh, elegant entertainment space.

The new space, which is located within the Royal Hospital’s historic West Wing, offers expansive views over the elegant grounds, and will complement the well-established reception and banqueting rooms already available to event bookers, as well as enhancing the venue’s corporate and private offering.

The whole of the house is available for hire, and consists of three downstairs reception rooms and three upstairs spaces. It’s the perfect setting for meetings, lunches, dinners, AGM’s, receptions or team-building sessions. The option to fully takeover also opens the opportunities for brands to create immersive and experiential activations in the space, taking advantage of the well-proportioned, high ceilinged rooms to bring their products and services to life.

Capacities range from 10 – 50 seated, to 15 – 60 standing, and an outdoor space is available on request on the South Terrace.

Joanne Cochran, head of events at Royal Hospital Chelsea, said: “We’re very excited to be opening Wren House for events, the restoration work has been very sympathetic and has kept the integrity, character and elegance of the original interiors. Full of wonderful touches and original features I believe it will appeal to those bookers looking for an intimate space, but one with plenty of theming potential for both private and corporate events. It’s another string to our bow, offering another revenue source for funds, which will be directed back to the ongoing upkeep of the Royal Hospital and its residents, the Chelsea Pensioners.”

The breath-taking home of the Chelsea Pensioners, the Royal Hospital Chelsea is set in 66 acres in central London. Founded in 1682 by Charles II and designed by Sir Christopher Wren, the Royal Hospital Chelsea was built as a home for 'veterans broken by age and war'.  For over 300 years it has housed the famous scarlet-coated Chelsea Pensioners, former soldiers of the British Army, who come to live in this magnificent site during their retirement.